I’ve spent the past 11 days in hibernation, or “hermit mode” as I’ve always called it. I haven’t left the homestead since New Year’s Day except for one quick jaunt up the road to pick up chickens. Not chicken as in groceries, chickens as in henhouse.

We planned ahead for this, even let people know we were hibernating so they wouldn’t feel slighted if they didn’t hear from or see us for a while. Eleven blissful days in and I have to say we are totally rocking this hibernation! It’s even better now that I’ve spent the past two years learning to preserve food and bake! Is there is anything better on a gloomy winter day than a fresh egg dropped into a simmering pot of nourishing grass-fed beef bone broth? Streaming Netflix in the middle of the day surrounded by the heavenly scent of baking bread? No. No there is not.

I’ve always hibernated, taken several weeks to hunker down and re-energize, connect with my creative spirit; taken a break from pouring so much energy out and focus it inward instead. I’ve been wanting – needing – to do this for a few years, but it’s no simple task. Life is busy. People don’t get it. Wine runs out. The hardest part for me is just giving myself permission to withdraw without explanations or excuses, to say no, and to stop worrying about how my ‘disappearance’ might affect others. Then things fall gently into place.

This year especially I needed to disengage from the universal energy of anxiety and disillusionment that has been swirling around and get myself centered and grounded. I knew I needed to focus on being present, shining brightly and sharing my light. But first I had to find the damn light switch and get myself good and lit. I have been so disconnected from myself. I feel like I’ve been in the midst of an identity crisis for years! Not a welder, not a gallery owner, not a San Diegan, not quite a Sonoman, not a farmer, not a cheesemonger, not a blogger. Honestly, I have barely been able to dress myself. Do I wear cowboy boots or welding boots? Muck boots? Snow boots? No boots? It sounds silly, but when you’re in the midst of trying to figure out who you are and where you belong it kind of sucks.

And being an artist without a medium is especially frustrating. I participated in an inspiring mosaic class at James Hubbell’s studio in San Diego and since then I have had moments of creative inspiration and the energy to do something with them, but they’ve been few and far between.

I told Jon that I was going into hardcore hibernation. I made it clear that I would not be accepting invitations, going places or making plans so if he wanted to leave the house or see anyone it was all on him. If I read his reaction correctly I’d say he was… relieved? Yes, 2017 was a lot. Between socializing, participating, renovating and the resisting we’ve both been left completely drained.

So for 11 days I have done only exactly what I wanted to do. For the first two days I withdrew completely. I barely spoke. I wrapped myself in blankets, tore through two novels and binge-watched Flea Market Flip. I made New Moon wishes, read an in-depth numerology report and meditated. I drank buckets of hot ginger and turmeric tea. On day three I emerged feeling “springy,” according to my journal, having dreamt up a coffee table design made from old wooden crates we got at an estate sale. In that moment I knew my creative muse was calling, and that is not a call you ignore. 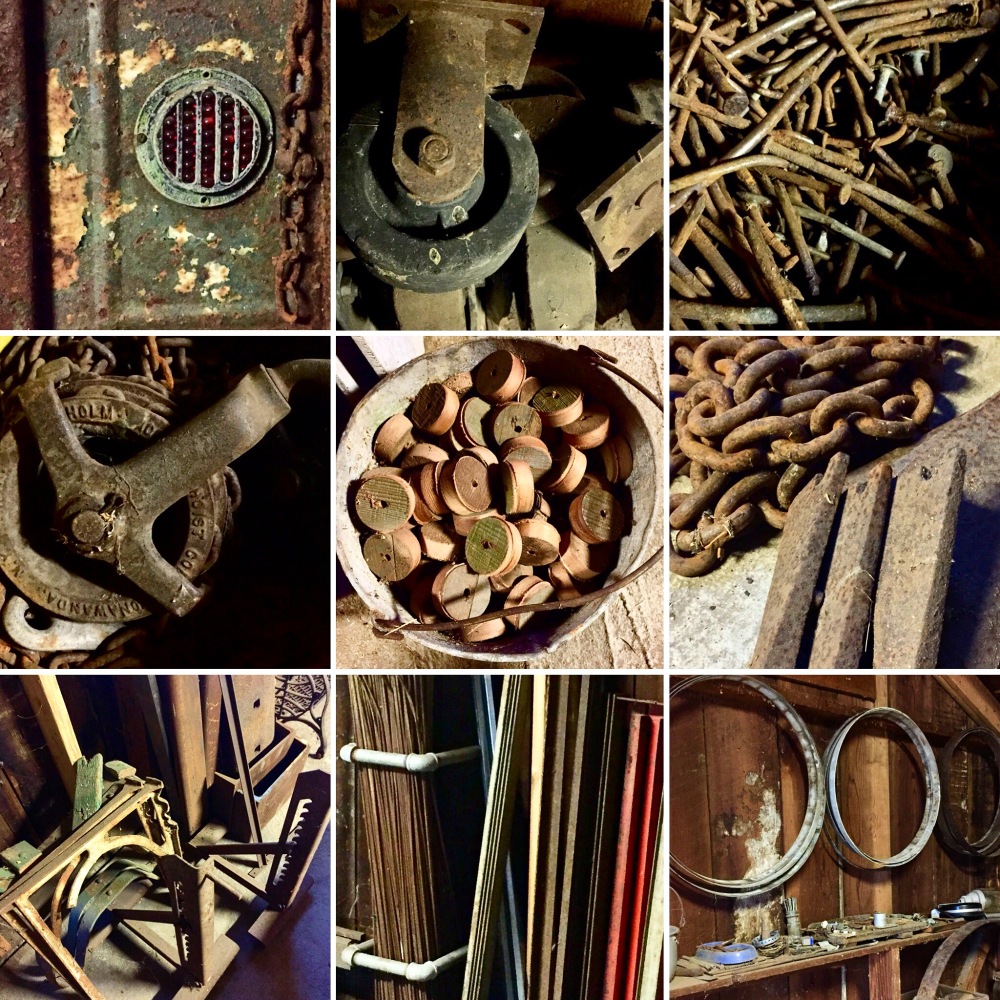 Since then we’ve spent our days assessing our treasures, dreaming up projects and making stuff. Having nowhere to be and no one to meet is so exhilarating! Freedom from demands on my time and energy is allowing my creative spirit to emerge and lurch forward on its newfound legs. I start when I want to and stop when I’m done. We spend our evenings soaking in the jacuzzi, then cooking and eating and streaming The Crown (this is a modern-day homestead after all, and chickens can only entertain for so long).

In a shocking turn of events, I made my first piece of upcycled furniture! I didn’t even know I made furniture! My flimsy nightstand / wine box is now a weird little steampunk-inspired side table. I painted, I glued, I sanded, I hammered – and it was really fun. Jon helped a ton, determined as he is to help me keep my momentum. And I don’t even care if anyone else likes it because I think it’s cool. Winning!

After: Kookoo steampunk side table!
I have no plans to discontinue this hibernation anytime soon. I suppose we will have to venture out eventually and hope our friends haven’t forgotten us, but for now I’ve got a freshly baked loaf of sourdough, an Instant Pot full of jambalaya and a pile of new mosaic supplies so think I’ll just keep on keepin’ on.